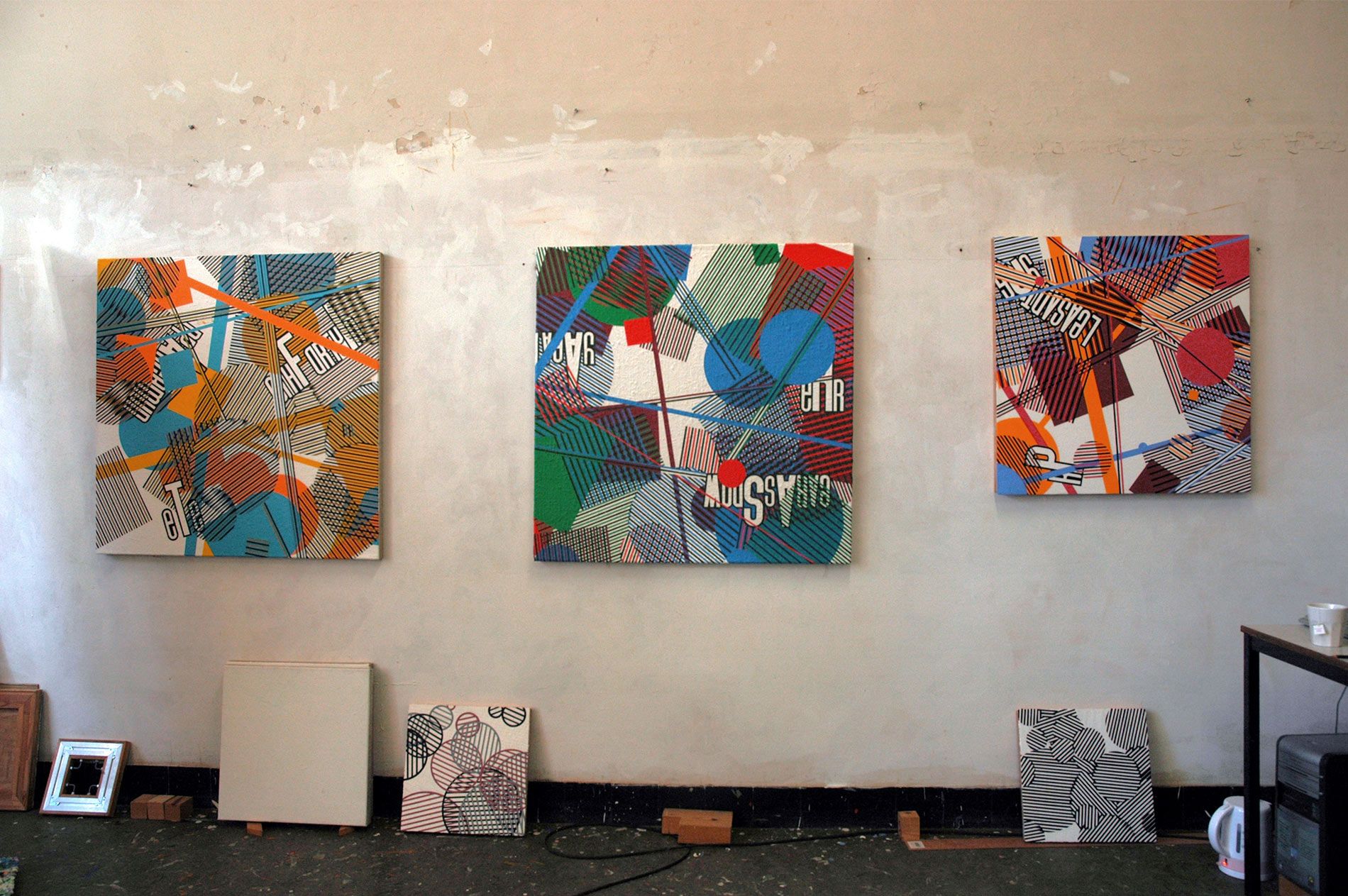 Sonia Rijnhout doesn’t avoid any point of view
Some recent paintings by Sonia Rijnhout look as if she had thrown a number of image fragments in the air that had randomly landed, overlapping one another. The fragments then combine as a whole in a plural structure. You immediately try to look through it, to walk through it, like when you move along the streets of a city, adapting your point of view, looking in all directions to always put your body in perspective with the environment. Sonia Rijnhout doesn’t avoid any point of view. A walk through a city never follows a totally random path and neither do her paintings. But the pattern around which they are carefully constructed is in itself random; she cannot avoid it and must see it through. As an observer, you are touched by a line of thoughts, by a flow of considerations that surround the assumption with which she approaches the world and the existence, and which allows common things to become uncommon.

Position and opposition
Sonia Rijnhout integrates into the city but contrasts with it through her paintings. The paintings simultaneously form a position, a proposition and an opposition. She builds these upon interwoven frameworks which, much like steel concrete reinforcements, create an eerie, spacious and transparent construction. In a general sense, her work points directly towards the compositions of the first constructivist painters, but such a comparison wouldn’t do justice to the fact that Sonia Rijnhout totally engages her independent artistic imagination when creating her paintings. There are of course numerous visually comparable works of art available, but the comparison possibilities don’t reveal in which way each artist distinguishes himself from the others.

When you liberate Sonia Rijnhout from the mere visual relationships that are omnipresent in art, she becomes even more recognizable. In her paintings, the city comes towards you and you’re automatically drawn into it. It’s the big city, the metropolis. In her compositions, its levels – from the subways to the helicopter decks – could be interpreted as the occasional pointlessness of one’s thoughts. In her paintings, the feelings and thoughts you experience in the city become a revelation of the way you act as an individual when confronted with the masses, of how you distinguish yourself as a human being in a community that equalises and subjugates everyone to another. What matters in these paintings is who you are and how you relate to other individuals who turn the city into a personal experience. Just as in urban environments where particular views and images form reassuring points of reference, in her paintings, often truncated wordings, which are beyond any form of typographical ornamentals, offer a means of personal orientation to the viewer: they show him where he is and how he relates to the environment, reveal what he thinks of it and reassure him, just like a holding handle on the bus. The continuous changes of the viewpoints give the paintings all their mobility. You’re riding the subway, entering and exiting tunnels. You move swiftly from overexposed views to darkened areas. There’s no beginning and no end to your journey. But beginning and ending try to connect at the very point of your movement. The paintings build bridging points in the way you look at things and think of things. They are visual aphorisms that form a foundation for a certain way of living. You discover this through the typographical fragments of statements that you cannot decipher. They make you think that there’s something hidden behind the wordings that cannot be explained. Something should precede them and something should follow. Everything in her work relates to the duality of viewing and understanding.

Empty spaces
In Sonia Rijnhout’s paintings, you look straight through mutually overlapping images. There are many empty spaces that activate your capacity to imagine invisible facets. These are paintings that should be looked at while moving, with views that surround you. The paintings make you imagine images of hidden patterns and subjacent intentions. Because Sonia Rijnhout doesn’t reveal these. You can see relevant decisions have always been made, though these sometimes required the original image to be disturbed. There are always things happening randomly, adaptations which hadn’t been planned. When creating her paintings, Sonia Rijnhout is her own “Control Comity”; she intervenes when and where required. Many of her paintings take into account the “surrounding spaces”. She orbits around the architecture or cylindrically cuts through it from within. It is remarkable that her work doesn’t contain any pure linear lines of thought, though the entire composition is nearly always built up out of straight lines, or at least uses pure mathematical shapes. She has an unusual point of view you should first get acquainted with in order to find out what you can see in her paintings. The available information tells you that Sonia Rijnhout knows exactly where she is, but you cannot tell where she is. You get lost in her images, which are constructions, built up out of thoughts, out of brain waves, with the mathematical, organic logic of insects whose facet-eyes divide all visible things in countless approximations of the real image. Many of her paintings feature several overlapping patterns. Out of a central point, satellites are released that take on an independent form. The core of the image is then left behind and ramifications are created that look at their origin in a different way than the one that was previously foreseen. It’s a prismatic way of working. When painting it becomes rhizomatic, like the outgrowth of a blackberry bush that threatens to choke its surroundings and from which you desperately try to escape if you happen to get entangled in it. You know you should be very careful when doing so, but that’s precisely what causes your distress; your impatience to free yourself. The functionality of the related components of the paintings is questioned by every addition that logically follows them. The resulting chaos is both the consequence and the origin of the logic.

Free floating
In her paintings, Sonia Rijnhout walks on top of the buildings like Harold Lloyd. But she laid them flat to do so. She puts the city on its side and walks up and down the façades with ease. Gravity is eliminated. Her paintings are free floating, weightless, architectonic webs, which only obey laws of their own infrastructure. Their internal relationships are highlighted by colour tones that are interwoven with contrasting shades. Each part of the paintings can be visually separated, like the organs of the human body. This can be done in a very clinical way, but you could never escape from the emotional consequences of such an operation. In these works of art, Sonia Rijnhout applies local anaesthesia to the architecture and dissects the urban structure as if it were a body; polyclinical interventions we can observe, as if we took part in the operation. The operation is required and unavoidable. She stretches our existence by mapping possibilities that we didn’t know of. She does so by idealising the daily usage of our environment with artistic proposals that bypass the limitations of our imagination. She represents each inner space of our thoughts as free, timeless and dimensionless areas, without beginning or end and always carefully cut out. The limitations of our thoughts have been captured in paint and there are many possibilities. They escape from the painted matter. Sonia Rijnhout is the archaeologist of modern architecture. On hands and knees she crawls through the foundations of today’s constructions. That space is her very working space, the theatre of her imagination, the materialisation of her points of view. In order to represent things clearly, you first have to darken the room. Then you light the screen. Sonia Rijnhout only lights it after descending into the basements. Then she pulls out of them again. In her architecture, you get thrown back to yourself within a massive anonymity, so much is true, but you really can get to meet someone there. It has been seen. It has been painted. It has no ending and it didn’t even start. It hasn’t been made up, but still it happens. It hasn’t been imagined. It has been made and expressed. It has been hit. It has been divided. Anyone can reach it. Nobody can do without it. You liberate yourself. It’s a wonder, a miracle, an oracle.

Offsets
Sonia Rijnhout’s paintings are light-hearted within their dynamic appearance. They possess a carefully measured movement, a precise rhythm, as if their construction followed a subtle choreography. Her work forms a partition for one’s thoughts and experiences, for one’s emotions and considerations. Nearly every image contains an offset. You relate the different components of the paintings by flashing your eyes back and forth, which your brain translates as a physical movement, swift and precise, like when you play hopscotch, skipping the spot where the stone landed. Once you’ve reached the end, you turn around to look for the relationships between the elements that compose the painting. The ruins support new constructions. Images drop and overlap each other, but as a whole they keep upright.
Alex de Vries 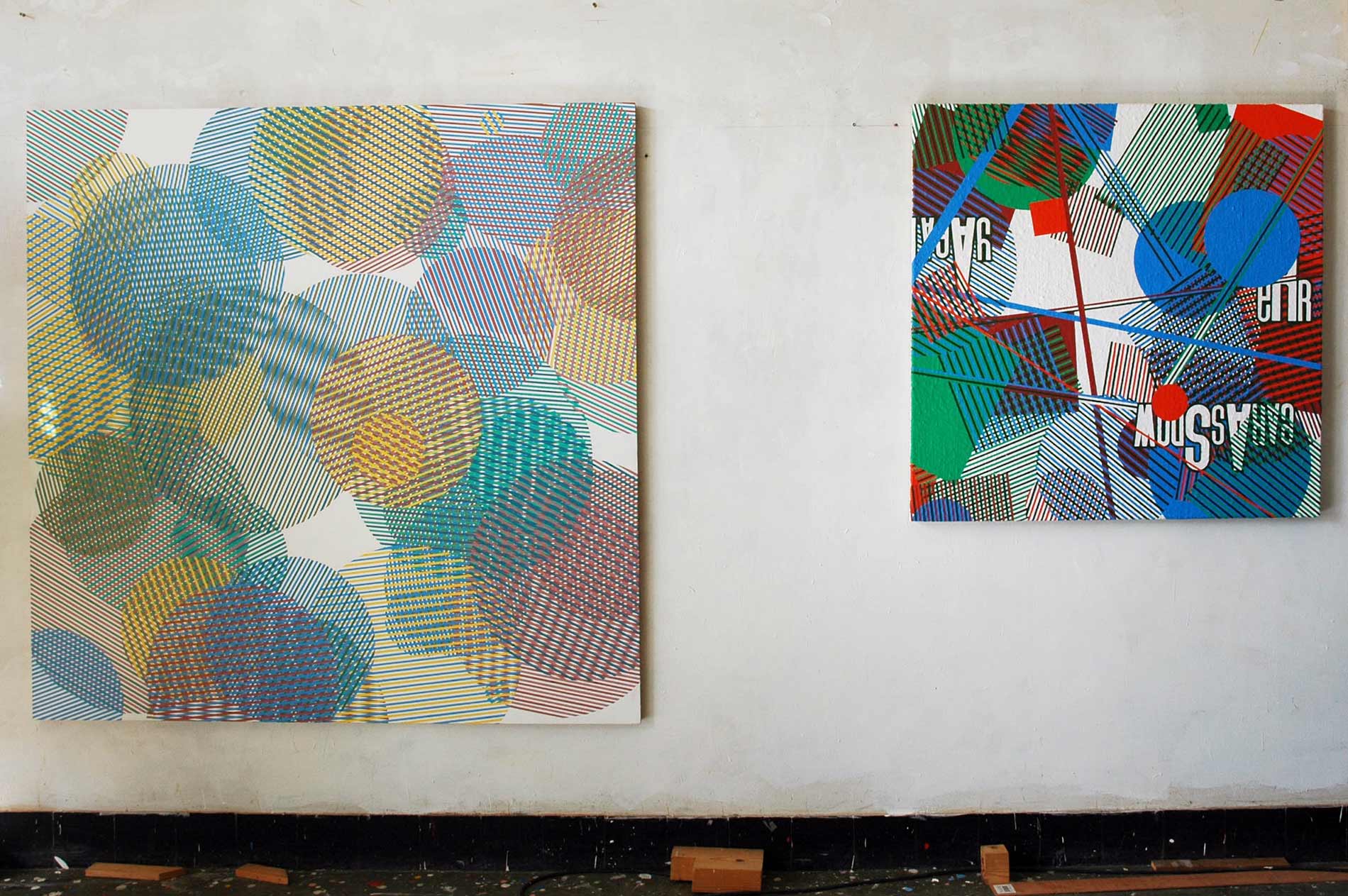 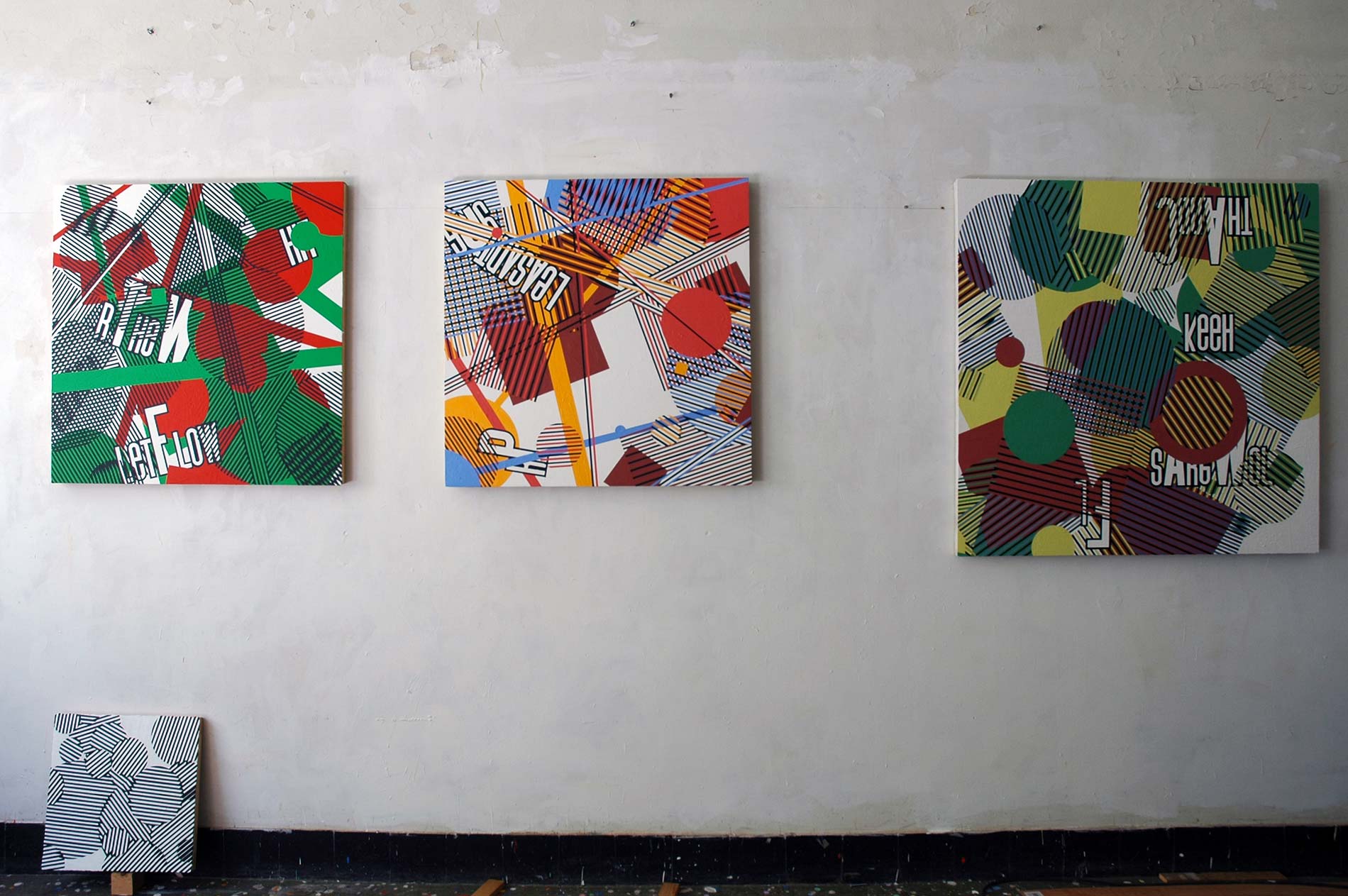 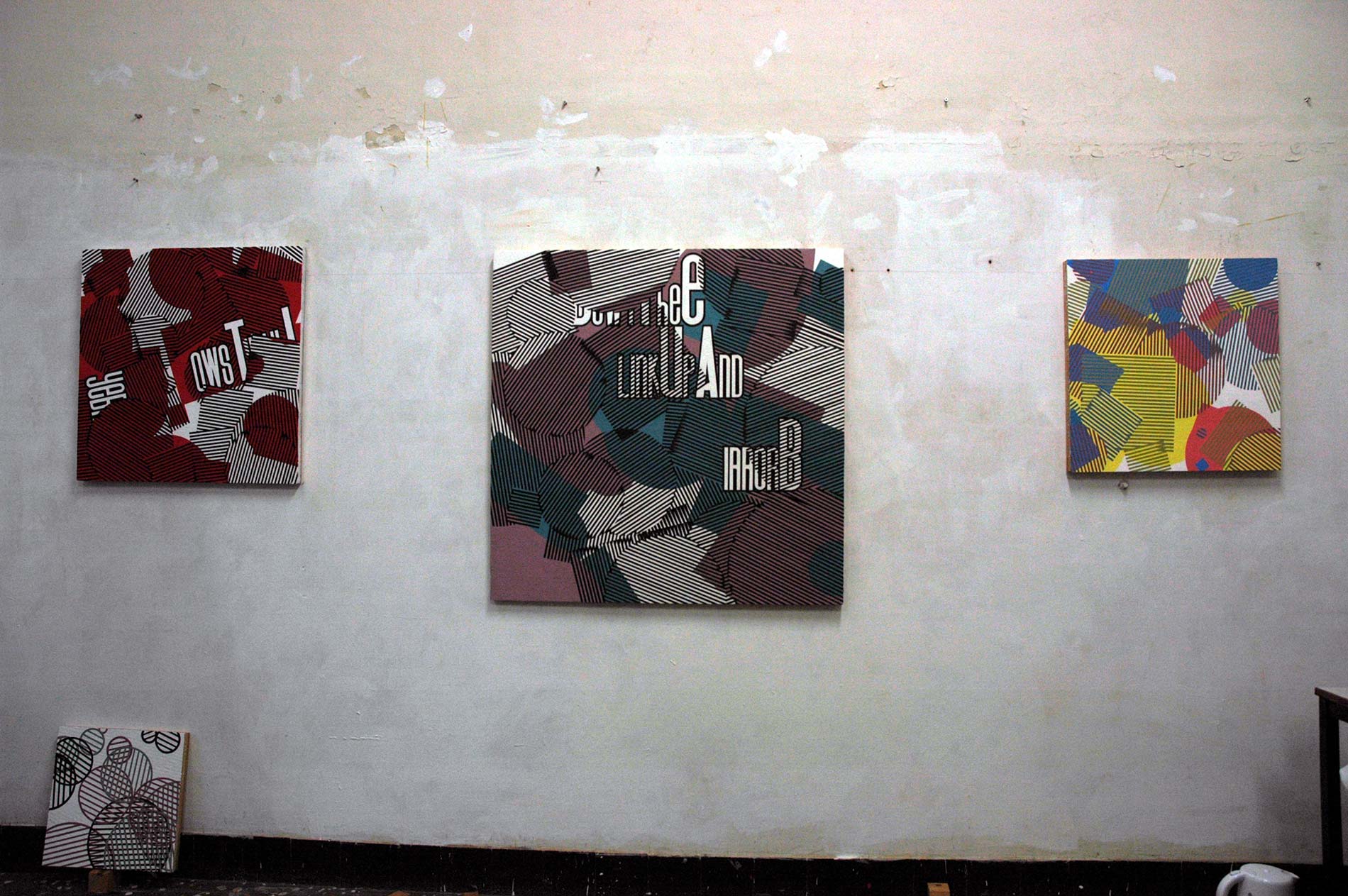 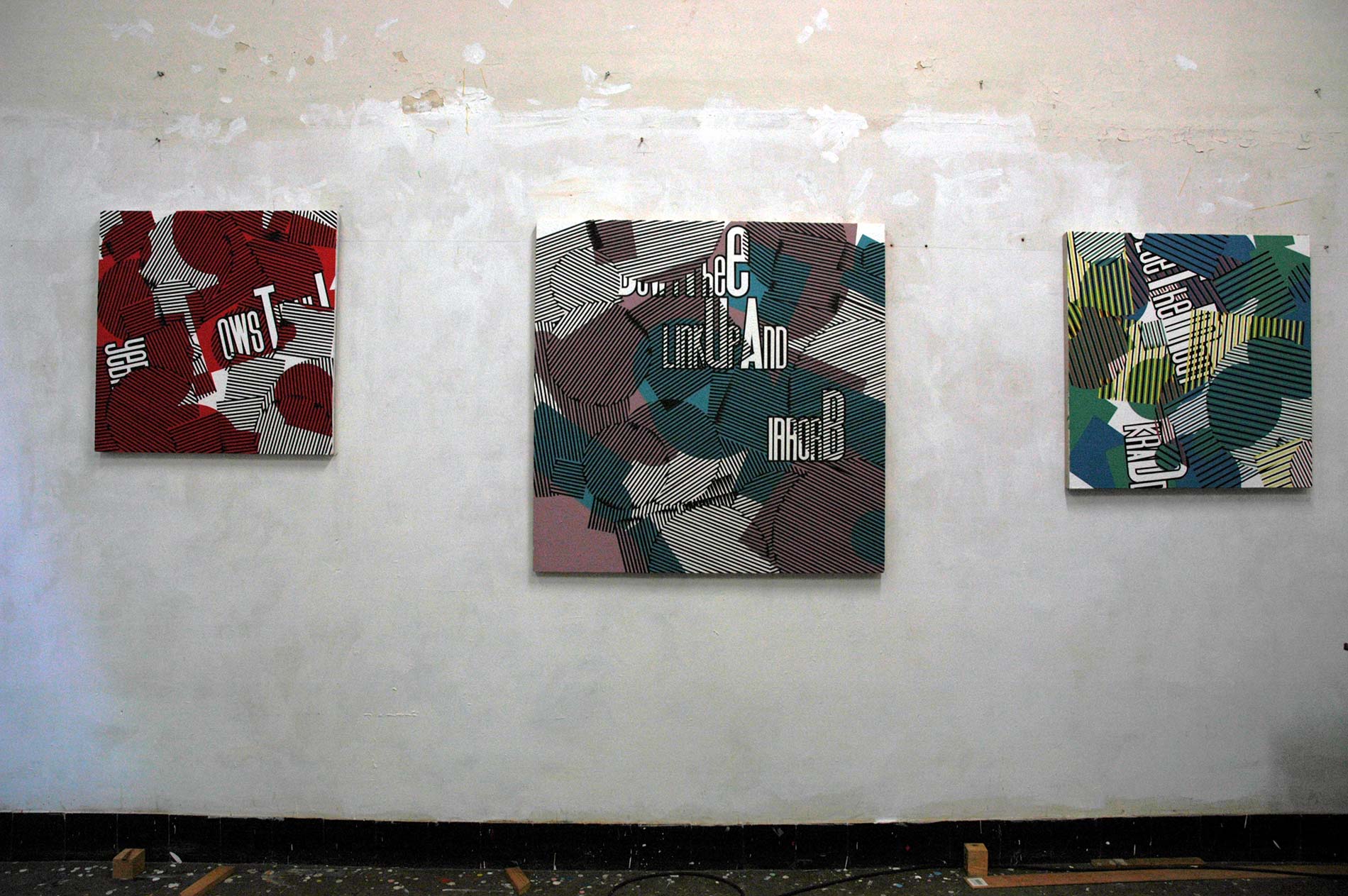